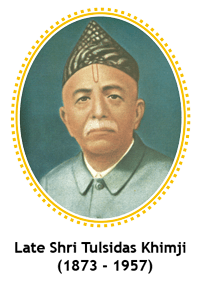 In the year 1895, Shri. Tulsidas in his early twenties started a firm in his own name with a table space in a reputed bank with goodwill and trust as his capital. The firm was named “Tulsidas Khimji” and the main business of the firm was to act as a controller of cotton on behalf of the bank. The firm steadily grew in name, fame and business volumes. Shri. Tulsidas, was a wise business man and a man of honesty and integrity, so much so that the banks and its British managers trusted him and entrusted the work of clearance and transportation of gold, bullion and silver to him.

Seth Tulsidas was regarded by the Banks as their confidential adviser. Shri. Tulsidas used to represent issues involving the trade to the port authorities and steamship companies and used to resolve the issues to the satisfaction of Clearing Agents and trade in general. Shri. Tulsidas made firm and fair representations before the authorities to solve the difficulties of Custom house agents. Shri. Tulsidas Khimji became the founder President of the Clearing Agents Association, Bombay in 1938 and continued till 1948.

Shri Karsandas, son of Shri. Tulsidas following his fathers footsteps took keen interest in the affairs of the Bombay Custom House Agents Association, now known as Brihanmumbai Custom House Agents Association. He was respected by all the members of the Association. One of them says, Karsandas apart from being a dramatic personality was well known for his human traits, simplicity of character and human understanding that made him a towering personality among his contemporaries.  He became the president of Clearing Agents Association, Bombay in the year 1948 till 1963 and again from 1965 to 1966.

In 1962-63, Shri. Karsandas became the founder President of Federation of Custom House Agents’ Association in India. The Federation at its second Annual General Meeting held on 13 March 1965 passed the following resolution:“Resolved that in view of the selfless and distinguished services rendered by Shri. Karsandas Tulsidas Khimji to the Clearing trade for the last about thirty years and also the Federation as its first president, the Federation is hereby pleased to make him the permanent “President of Honour’.

With the formation of the Federation, he was invited by Central Government and given a seat in the Central Customs and Excise Advisory Council in honour of recognition of his selfless service and devotion to the cause of the trade and an honour bestowed on a Clearing House Agency.

In the early years, “TK” used to handle not only the imports and exports of general cargo but also gold, silver and currency notes to and from various parts of the world by sea, land and air.  Most of the bullion shipments before World War II used to move by ships and mail boats, largely belonging to P & O, BSSN and Anchor Line. A few shipments were sent out by air from Bombay, whereas shipments by sea were effected in the early years through mail boats, and the bills of lading were placed on the same voyage as the cargo.

TK may be rightly called one of the pioneers in air cargo as they were handling bullion as agents for Imperial Airways (British Airways) and KLM in the thirties from Bombay and Karachi.  Soon after the end of the war, IATA started appointing agents for promoting passenger and cargo in India. TK was appointed as IATA Approved Cargo Agents as early as 1949. Thus heralding the journey of TK from Wheels to Wings.

With the growth of the business, the firm became a partnership in which his sons and grandsons joined as partners.  Later the firm was converted into a Pvt. Ltd. concern Tulsidas Khimji Pvt. Ltd.

From the founder till the current directors, TK has made major contributions to support and develop the cargo Industry in India.  TKPL is now spread over 12 locations in India and offer total logistics solutions to its customers in the country and abroad. TKPL works closely with like minded independent forwarders in countries all over the world to offer seamless logistics services. In pursuit of growth and excellence, TKPL has not forgotten its original objective of diligence, honesty, integrity and sincerity of purpose which are the hall marks of the century-old reliable organization.